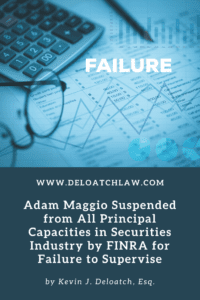 Publicly available records provided by the Financial Industry Regulatory Authority (FINRA) indicate that broker, Adam Maggio (CRD # 4177365) was recently suspended from all principal capacities in the securities industry by FINRA’s Department of Enforcement after an investigation into failing to adequately supervise trading in certain customer accounts at Joseph Stone Capital L.L.C. for potentially excessive activity.

The Law Office of Kevin J. Deloatch, Esq. is interested in speaking to investors who have complaints regarding Mr. Maggio or Joseph Stone Capital L.L.C.

According to FINRA Letter of Acceptance, Waiver and Consent (AWC) dated December 10, 2021 Mr. Maggio consented to, without either admitting to or denying, the following findings by FINRA’s Department of Enforcement:

As a result of such violations and in addition to the above described findings and conclusions, FINRA’s December 10, 2021 AWC also indicates that Mr. Maggio consented to the following sanction(s):

Adam Maggio Has A History of Securities Industry Customer Complaints

In addition to Adam Maggio being suspended by FINRA from all principal capacities in the securities industry regarding failure to supervise, FINRA BrokerCheck for Mr. Maggio reveals that he has a history of customer complaints and/or customer initiated arbitrations, including but not necessarily limited to the following:

If you or someone you know has or had a brokerage account with Adam Maggio or Joseph Stone Capital L.L.C. and have concerns regarding losses in your investments or possible sales practice violations including fraud, you may be entitled to recover lost funds. The Law Office of Kevin J. Deloatch, Esq. has an extensive securities law practice and over 30 years of experience on Wall Street. Call today at (646) 792-2156 for a free consultation. The time to file your claim may be limited so you should call today to avoid delay.